It’s been years - I can’t even remember when the last time i’ve been off on New Year’s Eve. Well, not totally off - I’m just getting home from working a matinee. But instead of being onstage at midnight, I’ll be home with my hubby. That’s nice. (Of course, by midnight he’ll already be in bed, but still, home together!)

Ed has an amazing knowledge of early recorded music. Example: Without identifying it, I played “Heebie Jeebies” by Louis Armstrong for him and after listening for a minute, he couldn’t identify the artist, but knew it was an Okeh label record recorded with the Truetone process, and guessed 1925. He was off by a year- it was 1926.

Okay, this is just sad. 49% of Republican voters nationally say they think that ACORN stole the 2012 election for President Obama. Actually, ACORN ceased to exist two and a half years ago.

In the last decade or so, I haven’t gotten out to the cinema as much as I’d like. However, this year I got a DVD-by-mail subscription and started to catch up on a lot of great things I’d missed. Click to see the list of all 43 films I saw this year.

In the 1950s incomes in the top bracket faced a marginal tax rate of 91, that’s right, 91 percent, while taxes on corporate profits were twice as large, relative to national income, as in recent years. The best estimates suggest that circa 1960 the top 0.01 percent of Americans paid an effective federal tax rate of more than 70 percent, twice what they pay today. America enjoyed spectacular, widely shared economic growth: nothing before or since has matched the doubling of median family income between 1947 and 1973. But today the conversation about top tax rates is whether raising them a hair above the current 35% is okay or not.

I will be glad to cast my vote for President Obama tomorrow. I would just for his support of my rights as a gay American. But even putting that aside, Democrats are far and away the better choice.

Worried about the economy? Let’s look at it.

Despite the Republican’s stated desire to see Obama fail, under President Obama, the stock market has had the second largest average annual gain experienced under any president, so far increasing its value by almost two-thirds. http://campaignstops.blogs.nytimes.com/2012/10/31/obama-vs-hoover/

The budget deficit has been getting smaller every year of the Obama administration, even though that’s an incredibly hard thing to do when your revenues are in the toilet because of the recession. http://andrewsullivan.thedailybeast.com/2012/10/chart-of-the-day-5.html

“Life is a sexually transmitted disease and the mortality rate is one hundred percent.” - R.D. Laing, Scottish psychiatrist (1927-1989)

Sad to think, but in our current political climate, I believe if a president said “Let’s do something great and grand!” the opposition party would do everything possible to thwart it. I’m glad we went in 1969, because America would never go to the moon today.

Yay! Electricity back on at my house!! I think I’m the last person I know to get turned back on.

We have decamped from the Quarter and are now back in our still powerless home. It’s warm but breezy by the open door. We gotta go outside and start cleaning up tree branches around the house. Then I work tonight 9 pm to 4 am. New Orleans rolls along.

Still no electricity at home - just went back for a supply run. So it’s another night away from home. Hope power is back by tomorrow.

We are spending the night at the “break apartment” in the quarter. It has electricity.

Hey everyone. Everything’s okay here. Lost power around 4 am. Still very windy. Loose tree branches scattered around the street. But we are okay. Family is okay too. One sister lost a chimney and another had a telephone pole break outside her house.

It is eerily quiet in the neighborhood. The school construction site next door is shut down, and there’s hardly any traffic. It’s peaceful. We had lunch at the Moon Wok in the Quarter. Was hard to find anything open - almost every bar and restaurant seems closed - but we were determined that life (or at least lunch) must go on despite the storm. Now we hunker down and wait. Ed is doing some last minute storm drain cleaning, and I’m listening to my favorite chill-out music.

FYI: We will be staying at home for Isaac. We have our emergency supplies ready.

Hey everybody, I am now the proud owner of a 1977-era Lowrey Organ: a “Symphonic Citation Theatre” model D500. This is exactly the kind of fancy organ I yearned to have when I started taking lessons in 1978, and the eleven-year-old in me is just giddy about finally owning one. (Huge thanks to Jan Schaeffer Cox & Ray for connecting me with the “organ donor” and facilitating the process.) 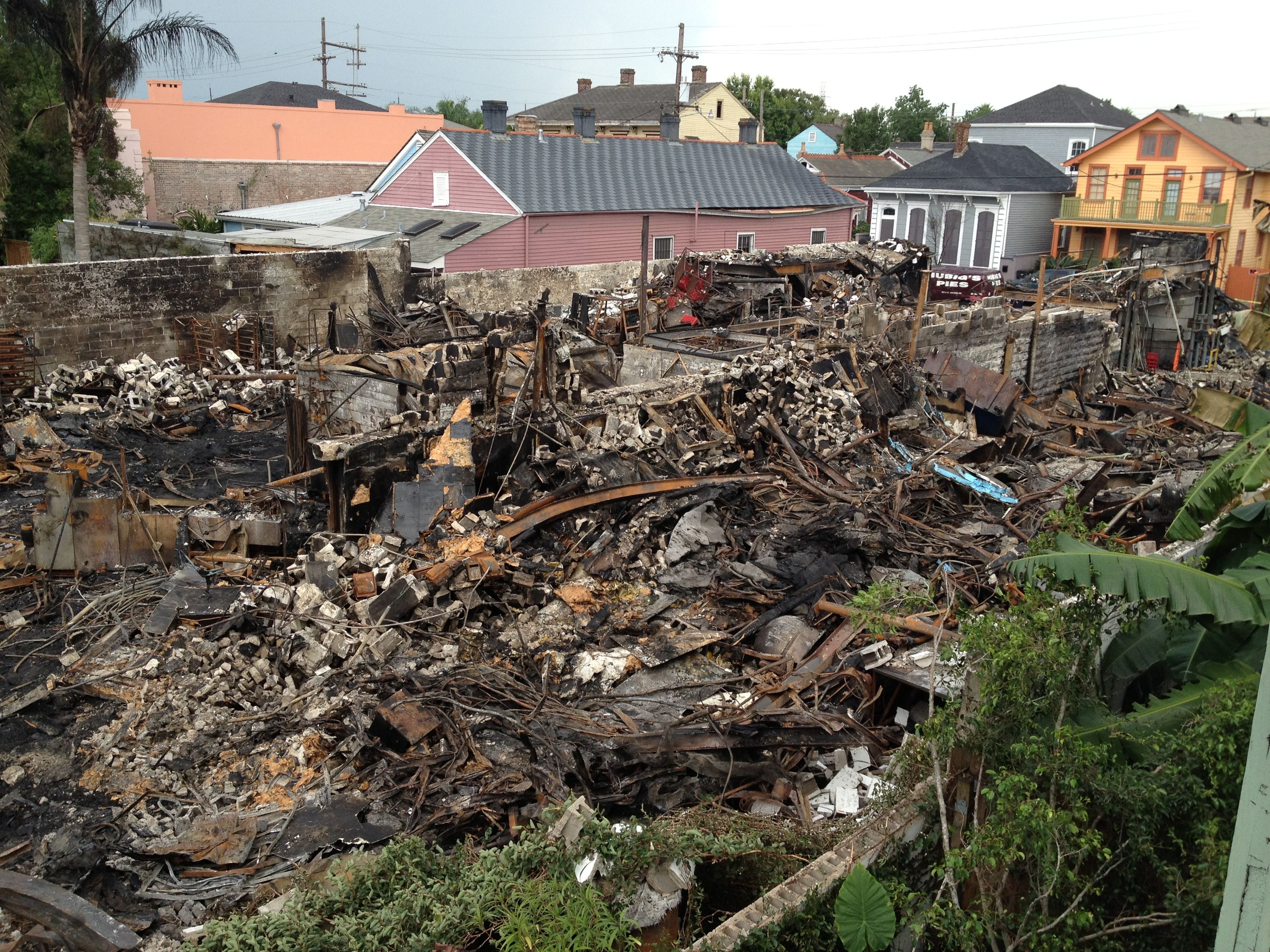 View of the burned-to-the-ground Hubig’s Pies site, from the bedroom window of friends.

“A clipboard and a confident wave will get you into any building in the world.” - from the movie “The Paper,” 1994

Starting tomorrow, July 1st, the Piano Lounge at Pat O’Brien’s will become a NON-SMOKING room. Kudos to my employers for being forward-thinking on this. All the entertainers are ecstatic - no more people sitting inches away blowing smoke right at you while you’re trying to breathe/sing. I hope audiences will not respond to the new policy with hostility.

We really only have one functioning political party in America. Democrats, who when occupying the presidency in the last two decades, govern moderately and dare I say it, even conservatively. I say a political party who wants to preserve current federal obligations (such as protecting Social Security and Medicare, food stamps and the like) should be considered the conservative party. The Republicans have devolved into radical ideologues that believe in things that are demonstrably untrue, and are utterly uncompromising even when you offer them their own positions. Details in this week’s column. http://10ksoapboxes.wordpress.com/2012/06/23/feel-the-news-republicans-unhinged/

How do you titillate an ocelot? You oscillate its tits a lot.

NYC Day 3: Museum of Sex (interesting exhibit on animal sexuality), Guggenheim (disappointing - half of it was closed), pastrami on rye at Katz’s Deli (delicious), now waiting for “Evita” to start. Home tomorrow.

NYC day 2: visited the Whitney museum for their biennial exhibition (was just okay), walked around Central Park (beautiful), Chelsea Market for lunch (panini), many beers at the Duplex (gay piano bar), and then gyros for supper. Now crashing at hotel watching Family Guy. A good day!

In the early Seventies, when I was just a child, we had “Patricia” by Perez Prado on some compilation album. This song lit a flame in me. I played it over and over, and I wanted so badly to be able to play the organ part. This was my first memory of wanting to be a musician.

I can’t keep Chris Pine, Chris Evans, and Chris Hemsworth straight in my mind. It doesn’t help that they’re all in comic book movies or the most recent Star Trek movie or both.

Group costume for Mardi Gras: the Republiclown presidential candidates. Walking in to quarter with society of St Anne.

“On a long enough timeline, the survival rate for everyone drops to zero.” Keeping one eye on Fight Club on AMC, listening to Debussy string quartets and chilling out on my last break. Crowds not so rowdy tonight. Thankfully. Last couple of nights have been real rough.

If your goal is to reduce the number of abortions, then you should want Planned Parenthood operational and fully-funded. Planned Parenthood itself estimates that through its contraception services it prevents more than 620,000 unintended pregnancies each year, and 220,000 abortions. http://www.washingtonpost.com/blogs/ezra-klein/post/what-planned-parenthood-actually-does/2011/04/06/AFhBPa2C_blog.html

Birthday supper at K-Paul’s. Had the surf & turf - blackened drum fish with a blackened filet mignon. Leek and mushroom soup to start. Let me tell you, everything was delicious. I made little moans of pleasure after every bite.

Sugar Bowl last week, BCS game tonight… I’m so ready for all of our beloved visitors to go the hell back home. Love y’all, really, and thanks for the tips, but all the crowds and mayhem has my nerves frazzled. (My ‘weekend’ begins tomorrow, yippee!)

Today through Monday, I’ll be working afternoons (2-8) in the piano lounge at Pat O’s. We’ll be welcoming a hundred thousand of our closest friends from Baton Rouge as BCS Championship mania grips the city. Also, I can breathe through my nose again! Feeling much better now that the worst of my recent cold is over.

These were rented from Blockbuster DVD-by-mail. (That service ended in 2014, along with the rest of Blockbuster. RIP.) Love Actually (2003) Walk