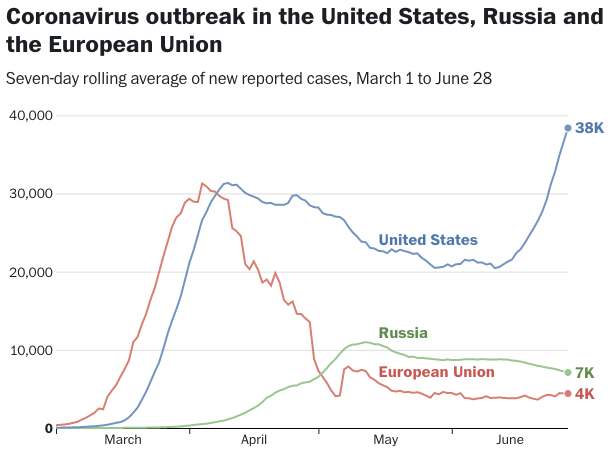 Does he actually want his supporters to get sick???

Check out a sampling of the falsehoods and distortions from him last week:

He cannot articulate a reason why he deserves a second term.

Here's the transcript of Trump's response when he was asked what are his top priorities for a second term. pic.twitter.com/XKMawRiXFs

He also told Hannity that Joe Biden is “gonna be your president because some people don’t love me, maybe.”

Actually, the entire Republican party is complicit in supporting Trump’s behavior at every turn, and therefore horrible as well.

Let’s face it, if a GOP politician actually cared about anti-mask ranty guy, they’d say to him “sir, the coronavirus is very real and dangerous, especially to those over 60, so I urge you to wear a mask to protect yourself and those you love.”

This is why some call today’s GOP a “death cult.” They’d rather lie about climate change than take action that might save the lives of their great-grandchildren. They’d rather see their base infect each other in churches and hair salons than admit the virus is real.

What does it say about a political party that it can’t even muster the integrity to say to its own supporters “I hear you, but you’re wrong, and if you continue down this path you are endangering your life and the lives of those around you?”

How does someone who understands science continue to be associated with such an irresponsible party and also continue to sleep at night? I don’t know what monstrous threats they think Trump’s GOP is protecting the nation from…but they must be pretty huge.

Zoom out and it looks even worse.

It feels like we the people have had enough.
Trump Job Approval 41% —– Disapproval 55%

This is a reminder that progress can happen, errors can be undone. Fun Fact: Gay marriage has now been around longer than the Confederacy was.

Hong Kong: 7.5 million residents, and receives 3 million travelers a day from abroad Only six deaths from Covid-19 despite having no lockdown. The